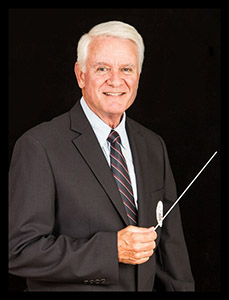 was a music educator in the Poway Unified School District for 35 years, serving as the band director at Mt. Carmel High School 1975-1990, then at Rancho Bernardo High School 1990- 2010. Concert and marching bands under his direction received awards for their excellence and performed at the MENC Western Region Convention in Fresno, the MENC National Convention in Anaheim, and the World Youth Music Festival in Geneva, Switzerland. They participated in a cultural and musical exchange in Japan and toured Washington DC and Hawaii. Four times his bands marched in the Tournament of Roses Parade, and they represented the State of California at the Bicentennial celebration of the signing of the Constitution in Philadelphia in 1987.

Tom received his Bachelor of Music degree and Teaching Credentials from Cal State University, Fullerton, and a Masters in Music Education from Southern Oregon State. He has studied conducting with Frederick Fennell, H. Robert Reynolds, Thomas Lee, Jerry Junkin, and Eugene Corporan, among others.

Tom’s musicianship, constant demand for perfection, dedication to his students, and passion for music have made him a highly-respected teacher and conductor. In 1988 he received the Honorary Lifetime Achievement Award from the Southern California School Band and Orchestra Association, and in 2007 he was honored with the California Band Directors Association Lifetime Achievement Award. 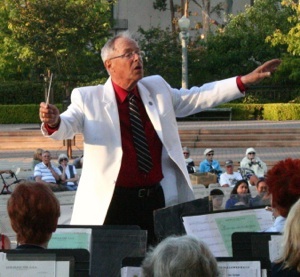 graduated from Indiana University of Pennsylvania, Carnegie-Mellon University (MFA in Flute Performance), and Southern Illinois University (PhD in Secondary Education).  Coach Fleming was Professor of Music, Associate Director of Bands, and Director of the Sun Devil Marching Band at Arizona State University from 1974 until 2002. He also conducted the ASU Wind Ensemble, Concert Band, and the Sun Devil Basketball Pep Bands. Upon his retirement from ASU, he was given the title of Associate Director of Bands Emeritus.  He is an active marching and concert band clinician.

Dr. Fleming served on the Board of Directors of the American Bandmasters Association and the John Philip Sousa Foundation.  He served as National President and Trustee of the National Band Honorary Fraternity Kappa Kappa Psi, and as President of the PAC 10 Band Directors Association. He has received numerous awards and honors, including honorary member of the Alpha Chapter of Phi Beta Mu, the International Bandmasters Fraternity; the Bohumil Makovsky Memorial Award to Outstanding College Band Directors from Kappa Kappa Psi; the Professional Fraternity Association’s Faculty Award of Excellence; the O.M. Hartsell Excellence in Teaching Award from the Arizona Music Educators Association; and the Distinguished Service To Music Medal from Kappa Kappa Psi National Honorary Band Fraternity.

Bob was a long-time friend and guest conductor of the Coastal Communities Concert Band.  After a national search, the band chose him as its music director and conductor in 2008.  In April of 2013 Bob was awarded the Music Director Emeritus distinction with the band.  Bob and his wife Brenda live in Tempe, Arizona